We’ve spent years meticulously preparing and constantly improving this amazing tour. The locally guided tour has been designed to stimulate all your senses by combining the scenic views, the versatile tastes of the regional cuisine and the rich cultural heritage into one exciting experience.

You will be comfortably accommodated in the center of cities and in the heart of the countrysides along the way. With the assistance of specifically chosen local experts, you will learn about the fabulous architecture, local traditions and the region's rich history.

Explore the scenic and cultural contrasts of these fascinating countries that share the Iberian Peninsula. Visit Portugal's Lisbon and the UNESCO World Heritage Sites of Sintra and Evora, as well as the best of Spain in Seville, Toledo, Córdoba, Madrid and more. Have lunch at a sherry bodega, a taste of authentic Andalucían cuisine at a local restaurant and pay a visit to the Royal Andalucían School of Equestrian Art.

Make your reservation now to seal your place and departure date. Hurry up, because this highly demanded tour is filling up very quickly! Call Presleith McPhee at Ravissant Dream Travel at (954) 674 8435 and guarantee an experience of a life time. 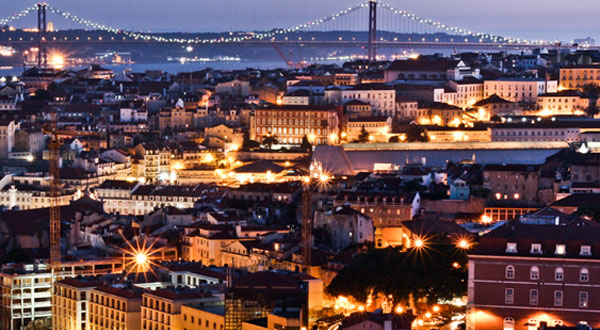 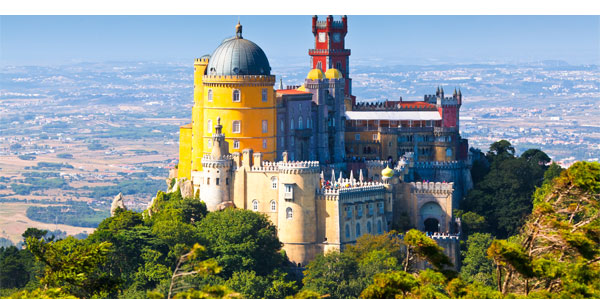 After a complimentary transfer from the airport, your Spain & Portugal tour begins in Lisbon at the Four Seasons Hotel Ritz. The afternoon's guided sightseeing tour in Lisbon provides an introduction to this intriguing city and its famous landmarks. We'll visit the famous monastery Mosteiro dos Jerónimos and the National Coach Museum, and view the nearby Tower of Belém, both UNESCO World Heritage Sites from the mid- 16th century. We'll see the Discoveries Monument commemorating Portugal's "Age of Exploration" of the 15th and 16th centuries. We'll end with a welcome reception and dinner.

Along the Portuguese Riviera to Sintra & Cascais. Sintra, once a favored summer retreat for Portugal's monarchs is a UNESCO World Heritage Site. We'll visit the 14th-century Royal Palace of Sintra, a highlight of every Portugal tour. Then we'll continue to the fishing village of Cascais, known for its bay which is dotted with brightly colored boats. We'll return to Lisbon for a free evening in the city.

A mix of Roman, Moorish & church architecture. We will visit medieval Evora Cross, with Europe's longest suspension bridge – the Vasco da Gama Bridge over the Tagus River. The bridge will take us to the medieval, walled city of Evora, also a UNESCO World Heritage Site. The city tour with a local guide reveals how Evora's Roman ruins, Moorish arcades and a score of churches and monasteries create a fascinating cultural tapestry. We'll visit the Capela dos Ossos in the 15th-century Church of São Francisco, and the Cathedral of St. Mary. We'll spend this night at a 15th-century convent-turned-luxury hotel and spa in a picturesque location in Evora.

We'll conclude our Portugal tour with Andalucía & Seville in Spain. Spain's famous southern province of Andalucía is as famous for gypsies and flamenco dancing as it is for its seaside resorts and small, whitewashed villages. You'll see the Roman ruins of Mérida, some of the best-preserved in Europe. The provincial capital of Seville blends the vibrant Spain of today with centuries of history and old-world charm. We'll spend the next two nights in the heart of the city at one of Europe's most luxurious hotels, commissioned by the king of Spain for the famous Exposition of 1929. 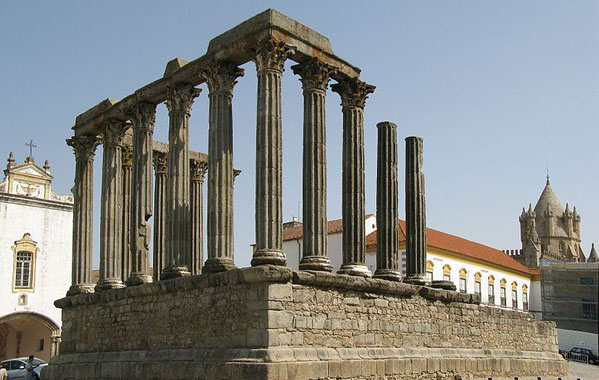 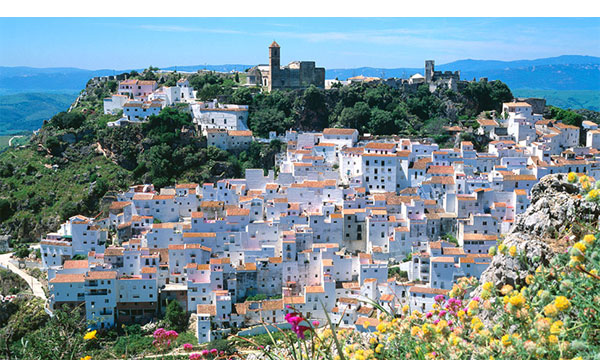 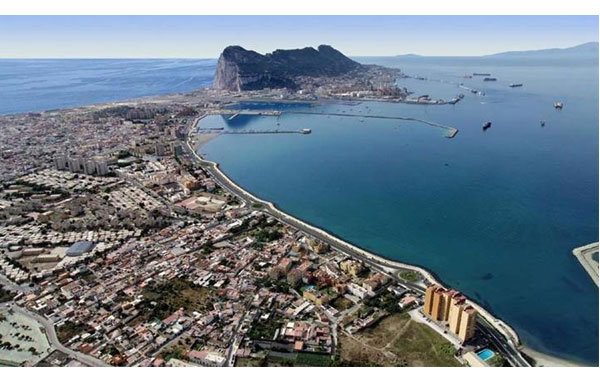 A carriage ride, a historic cathedral & more. After visiting many of Seville's historic and cultural attractions on a sightseeing tour with a local guide, we'll ride a horse-drawn carriage through the city's historic heart. We'll visit Seville's impressive Gothic cathedral, see its renowned Giralda bell tower (once the minaret of a mosque during Seville's Moorish days), as well as the tomb of explorer Christopher Columbus. Enjoy a walking tour of fascinating Barrio de Santa Cruz, the city's Jewish Quarter, prior to exploring Seville. End this exciting day with a free evening.

Jerez de la Frontera, Gibraltar & coastal Marbella. We'll depart Seville for Jerez de la Frontera, known for its fine horses, sweet wines, and sherry. We'll visit the palatial Real Escuela Andaluza de Arte Ecuestre (Royal Andalucían School of Equestrian Art) – where you may watch the famous Andalucían horses that are bred here in a training session – and its renowned Carriage Museum. Alternative sightseeing may include a visit to the Royal Alcázar of Seville. Enjoy a true taste of the region during a tapas lunch at a sherry bodega. We'll continue to Gibraltar, where you'll view the fabled Rock and see the famed Barbary Macaques in the Apes' Den. We'll end with the glamorous coastal resort town of Marbella on the Costa del Sol, for a two-night stay.

A day by the beautiful sea in Marbella. Enjoy the pleasures of the elegant hotel - Grand Meliá Don Pepe, a paradise for the senses in the heart of the Costa del Sol. On one side is the famous Port of Marbella; on the other, gleaming white boats anchored at the exclusive Puerto Banús. And on the horizon, you can see Gibraltar and the North African coast, majestic in the distance, against the magnificent backdrop of the mountain peak La Concha de Marbella. Long a favorite of celebrities in Marbella's privileged enclave of Sierra Blanca, the resort's guest list has included Sean Connery, Julio Iglesias, Prince, Maximillian Schell, Arthur Rubinstein, Begun Aga Khan, Alain Delon, H.R.M. Prince Edward, Bob Hope and many more...

Moorish influences in Ronda & flamenco in Granada. We move on from the Spanish coast into the mountains to visit scenic Ronda, perched on a cliff overlooking the spectacular El Tajo gorge. Ronda is synonymous with the evolution of the art of bullfighting; along with revealing the town's Moorish heritage and remains, a guided walking tour includes a visit to one of Spain's oldest bullrings, the Plaza de Toros. We'll continue to Granada, situated in the foothills of the Sierra Nevada range. The city boasts extraordinary architecture from over 250 years as the capital of a Moorish kingdom. Your hotel is steps away from Granada's celebrated Moorish palace - the Alhambra. Enjoy a private flamenco show tonight, followed by dinner at your hotel. 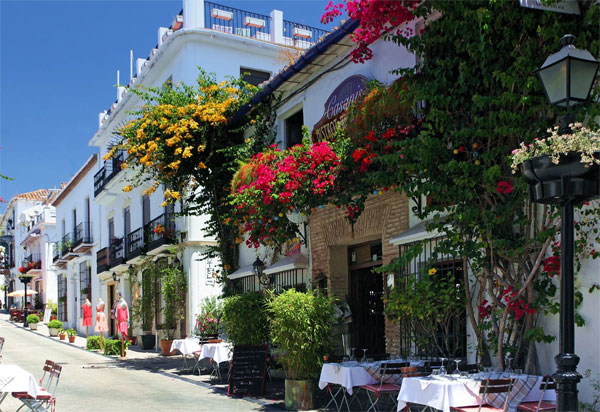 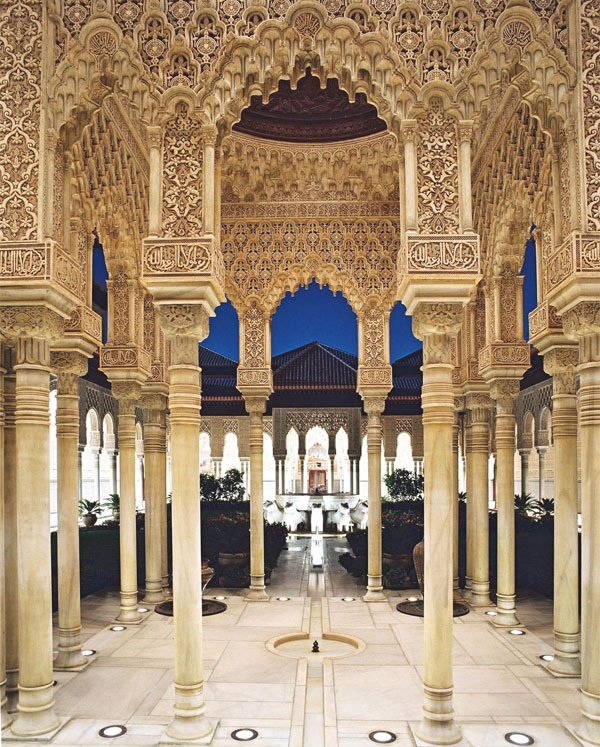 Discovering the treasures of the Alhambra in Granada. One of the tour's highlights - the guided visit to Granada's famed Moorish palace, the Alhambra, constructed to be a "paradise on Earth" by caliphs who ruled here in the 13th century. Tour the palace itself, considered to be one of the world's most beautiful and stroll through the Generalife, the grounds of the summer palace of former sultans. Enjoy some free time on your own and join us for an à la carte dinner at a popular local restaurant in the evening.

Córdoba, home to La Mezquita & more. We'll travel from Granada to Córdoba for an overnight stay that begins with a guided walking tour through the cobblestone streets of the Judería, Córdoba's former Jewish Quarter. From its alleyways, you can see the walls and decorative details of the candy-striped La Mezquita. It's a masterpiece of architecture and art, revealing its nearly 1,200-years history as an early Christian church, a Moorish mosque and since the 16th century, a Roman Catholic cathedral.

AVE train to Madrid. Board the AVE train in Preferente class for a rail journey to Spain's amazing capital city. We'll arrive in Madrid for three nights at The Westin Palace, Madrid – a Belle Époque landmark in the heart of the city. We'll take a short walk through the tapas bars that American novelist Ernest Hemingway made famous. Join a local guide for an orientation tour of landmark sights that includes a walking tour of the city's vast Plaza Mayor and the Mercado San Miguel; after lunch, enjoy a guided visit to the Royal Palace.

The Prado & more museums of Madrid. We'll view the art treasures of the celebrated Museo del Prado, one of the best-known museums on Earth, with a local expert. The rest of the day is free. We offer admission to the Thyssen-Bornemisza Museum to see works by Titian, Goya and Picasso. 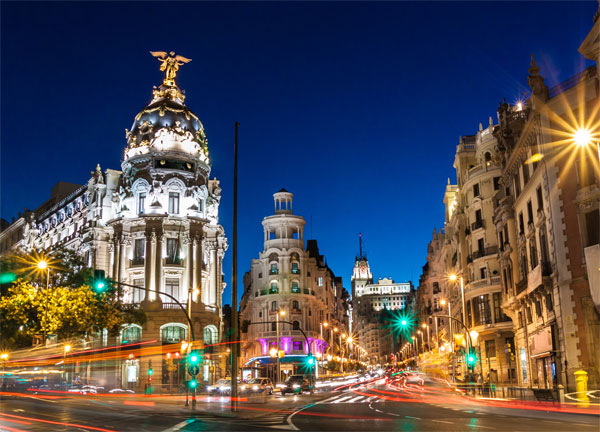 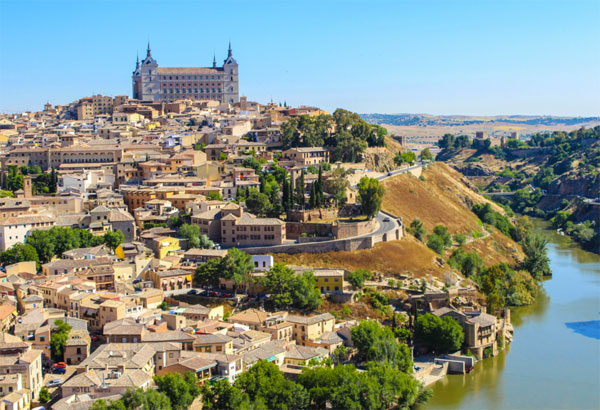 A day trip to Toledo and a special farewell evening in Madrid. A full-day excursion from Madrid to Toledo that features guided sightseeing of this monument-filled city. Join the local guide for a walking tour that includes the 12th-century Synagogue Santa Maria La Blanca, the Church of Santo Tome and a visit inside the 13th-century High Gothic-style Cathedral of St. Mary of Toledo. After lunch in Toledo, we'll return to Madrid, where a farewell evening featuring dinner and Castilian entertainment awaits for you!

Journey home. We'll provide a complimentary transport from the Westin Palace to to the airport. Our exceptional travel services do not end here! For a small additional fee we offer our clients flight arrangements to and from the departure cities, shore excursions for the cruises and optional insurance coverage. Please contact us for further information. 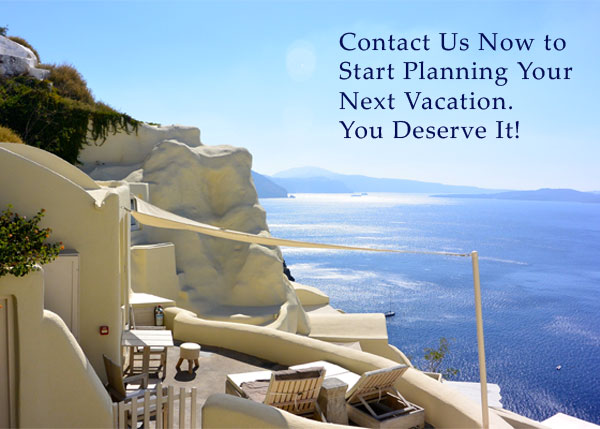